It’s the little things…..the small details that etch their way into people’s hearts, imprint their memories. It’s the gelato coloured cotton wool balls in a glass jar on my grandmother’s dresser. Her Elnett hairspray. And her scent – face-powder and Clinique cream blush. Her bedroom had such a distinctive smell: a combination of her, the furniture, the briny Sea Point breeze…..I keep thinking if I breathe deeply enough I will smell it again.

There is something so unbelievably evocative about scent and taste. While I was at Coles last week, I bought some Fox’s Glacier Mints and Glacier Fruits. I love the idea of having a bowl of wrapped sweets on the lounge room coffee table for when guests are over. I like the look of it during the week. It makes us look like a fun, lolly filled house. My own little Wonka’s chocolate factory. The problem is that we have a whole lot of Oompa Loompas in the house too. 4 to be exact. They know I won’t say no when they have their Oompa Loompa friends over. No-one wants to be the mean mummy (I use up all my meanness saying no to sleepovers and shouting at them to clean up their mess when they do “experiments”). So my lovely little bowl of lollies has been offered to my own guests once and the Oompa Loompa’s guests approximately 43 times (they are quite social, my Oompa Loompas). 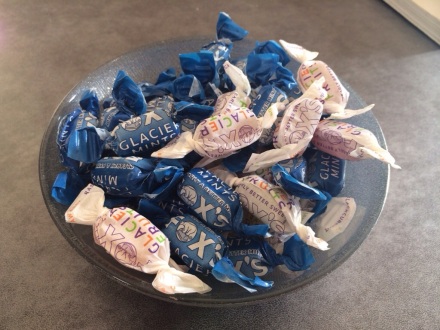 The other problem with the lolly bowl
is that, like Willy Wonka, I too am
partial to a sweet or 10. So perhaps the rapid decline of the bowl is not entirely the Oompa Loompas’ fault.

Up until last week I had only bought Fox’s mints. On Wednesday I added the fruits to my bounty. As I emptied the packets into the bowl, I unwrapped a blackcurrent one. It was my childhood in a hard boiled lolly. You have to understand I was weaned on Ribena. That and Strawberry Quik. I seem to have scores of sensory memories of blackcurrent pastilles and the lack of responsibility that came with that time. One suck of that blackcurrent, and just for a moment I felt a million miles and hours away.

This week I bought the Donna Hay Kids’ edition #11. It comes out once a year which means I have been buying it since Firstborn was born (possibly I bought the first issue on back order). I used to absolutely hang out for the kids’ issue. This year, more than anything, it just made me feel nostalgic.

Partly, it was the recipe for homemade musk sticks. My taste buds sprang to attention. Just the thought of a musk stick, or some Musk Lifesavers, has me hankering for that taste, and a few minutes of that time of my life again. I scoured the internet for kosher musk essence so I could, thanks to Donna Hay, make my own musk sticks, but so far I haven’t found any.

But the nostalgia was not just for a long ago taste. When I used to buy the Donna Hay Kids’ issue (DHK), I was convinced that in its folds I would find the perfect meals for my preschoolers and toddlers. That somehow the key to getting them to eat healthy, balanced meals was in the pages of the magazine (yes I am a marketers dream). All I needed was the right recipes. Now that my kids are older, I know, through trial and error and hours spent making snubbed dishes, that no such recipe exists. Even though I know this, the quest for the holy grail of cooking magazines / cookbooks continues. My kids aren’t even that fussy any more (well Master 6 is, but he gets told each night – you can have what we’re having or your can have cereal. He often chooses cereal but I don’t care – I OFFERED the well balanced meal and that’s all that counts on Planet Mum).

A couple of months ago I bought a new “family cooking” magazine called One-Handed Cooks. Full of expectations, I thought that I would find pages of healthy lunchbox, dinner and snack ideas that would leave my kids begging for seconds, that I could easily whip up with one hand, whilst the not insignificantly sized Baby N sat nestled in the other. It’s a clever name that, One Handed Cooks. The magazine is beautifully laid out, and there were a few recipes I will try…..but not surprisingly it did not fulfil my (unrealistic) expectations.

The other reason I used to yearn for the new issue of DHK was parties! There are always gorgeous pages of perfectly styled kids’ parties. I got plenty of ideas and recipes from these pages. There were years when I would take out a stack of back issues and tell the kids to pick their birthday cake. There is one word why this is less exciting than it used to be and that is Pinterest. And Internet explosion. We have access to kids party porn (yeah that really sounds wrong…..but so wrong it’s kind of right) 24/7……the pages of the magazine just don’t hold the same allure anymore because now I see this stuff all the time.

And so paging through the magazine I felt less excitement and more…..just nostalgic. Nostalgia for that time when I would note down in my diary the release date on the kids’ issue. When I eagerly read through it and envisioned all the well eaten dinners I would create, all the brilliant kids’ parties I would bake for, style and host (now I just buy my way out of them). When the kids were all small and the days were hectic but relatively simple because when your oldest child is in preschool, your children’s needs may be endless, but they are relatively simple.

I can’t go back in time, but if I can find that musk essence I might, even if it’s just for a sensory based flash.