Working Boy officially thinks I am bonkers. He said yesterday’s post was ridiculous as unless you had actually read any of the Value Tales recently, you would not find it funny. I said who cares? I have read them (many many times), so I found it hilarious. Anyway, who says an audience of two is not valid?

To keep things universal, today we’ll cover something everyone can relate to. Handbags. You don’t need to have read a pompous series of seventies children’s books to understand handbags.

You know those magazine features where they show what’s in a certain personality’s handbag? First there’s the latest designer handbag, and then the contents, a carefully curated collection artfully laid out. Each piece outdoing the previous screaming “Look at my life! Aren’t I stylish? Aren’t I savvy? Aren’t I clever and cool?”. It’s just like my handbag. You’ll see.

My father in law once commented that I had the messiest handbag he had ever seen. Let’s just say, I like to know that if I was stranded somewhere I could survive for at least a few hours, if not a day, with the contents of my handbag. This is actually somewhat ironic because rarely do I go further than a 10 minute driving radius from my house.
But anyway…..
Here it is. What’s in Shopping Girl’s handbag. This is no photoshopped mag feature. Gird your loins. This is the warts and all (I have 4 boys – apparently warts are inevitable 😁) version. 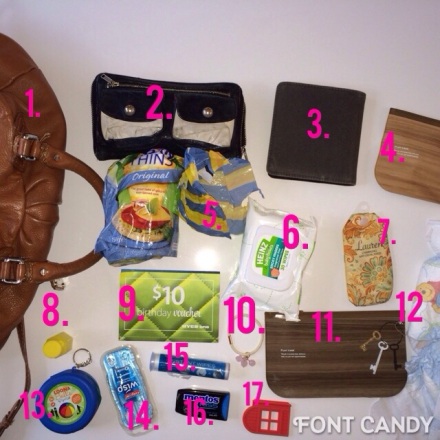 Firstly, yes. I have so much in my handbag it required two photos.
1. Marc by Marc Jacobs something or other bag. They all have names, but really, who can remember?…..a birthday present from MOS-G years ago.
2. Mimco purse – an oldie but a goodie. Also a birthday present from
MOS-G another year. Yep she’s a keeper, that MOS-G.
3. Folder for all those loyalty cards.
4. Small case, technically for receipts.
5. Corn Thins – you never know when a baby will get hungry.
6. Heinz Sticky Fingers Wipes – because if baby does hungry you do know fingers will get sticky.
7. Case for re-usable shopping bag. Not the shopping bag. Just the case. It says my name and it says I’m charming. Yep, MOS-G again.
8. Blowing bubbles. Can’t say I’ve ever broken them out but better to be safe than sorry I say.
9. A $10 birthday voucher from my friend, Myer. If I see it floating around my bag, maybe I’ll remember to use it.
10. A Mimco hair elastic. In case of hair tying emergency?
11. Another small case. This one is for banking deposit slips. And there are actually deposit slips in there. Surprising isn’t it?
12. A spare nappy for Baby N. One size too small. Even though I carry a separate change purse.
13. It’s a blow up ball in a case. Or should I say “in case”. In case of playing emergency.
14. Disposable toothbrush. Yep, you’d think I was young, single and living in NYC. Although, granted, not if you looked at the rest of the handbag.
15. Instant wipes – just add water to these little discs. G-d forbid I am EVER caught out without wipes.
16. Mentos Kiss mints. I hate post-coffee mouth. I drink a lot of coffee. In fact I really imbibe more than I drink.
17. A door to the Thomas the Tank Engine Talking Roundhouse. Well, it speaks for itself really.
18. Hat for Baby N. All babies need hats with ears. Baby N has no idea how cute he looks because he pulls the damn thing off.
19. Emergency sultanas.
20. Empty emergency sultana box. Clearly there was an emergency.
21. A used parking ticket. Crucial to handbag ecosystem.
22. Loose receipts. 4. Isn’t doing his job properly, is he?
23. Small cosmetics case with tissues. Yep they have shoes on them. I don’t even need to say it anymore do I? MOS-G.
24. Spare keys to my parents’ apartment.
25. A small, blue matchstick.
26. The lid to a sippy cup. Not the sippy cup itself. Just the lid.
27. A small pink notebook. Rendered fairly useless by the iPhone yet still carried everywhere.
28. Lip glosses. Cos the UNIVERSE WOULD CEASE TO BE if lips stop shining. Personally I prefer kissing my baby often and not leaving a smear of Calvin Klein…..so these are mostly unused, but gosh I love the idea of lipgloss.
29. Bubblegum scratch and sniff stickers. Because in my imagination I am the sort of Mom whose tween children respond to stickers as behaviour “incentives”.
30. Bondi Beach parking permit. Mine expired in March. I’ve been carrying around the renewal forms since.
31. These are Nintendo points cards bought when I realised that no ten year old responds to stickers. No, I also don’t know why they have to come everywhere with me.
32. Corn Thins in ziplock. Because I forgot I had the other packet.
33. Scripts for Master T’s asthma and excema medications. I actually do need these but somehow when I am standing in the pharmacy they are nowhere to be found.
34. My old Medicare card. Now I have two. Not including this one. 6 people
don’t fit on one card.
35. A cable to connect my iPod to the car speakers. Useful. Would be more useful IN my actual car.
36. A bandaid. Again, never to found when actually needed.
37. A second spare nappy. Also one size too small.
38. Some loose change. Clearly thinks it’s too good for Mimco.
39. Expired driver’s license.
40. Some string. Yes, string.

So there you have it. The contents of Shopping Girl’s handbag. I can hear the magazines calling now……
XOXO Shopping Girl